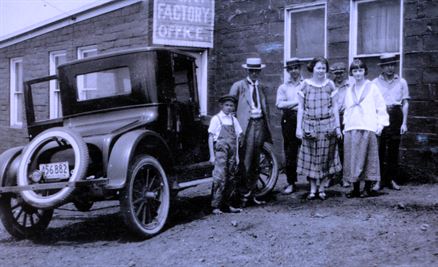 J.C. Whitlam Manufacturing Company was founded in 1900 on a single product, Tyte-Unyte® Pipe Joint Compound, and for the first thirty-eight years, it was the company's only product. Today, J.C. Whitlam Manufacturing supplies over 300 chemical specialty products, many of which are related to pipe joining. The company has a proud history of ownership and management by the same family with operating responsibility now in the hands of its third generation.

J.C. Whitlam Manufacturing is one of the few remaining independent family businesses in the plumbing industry, especially among manufacturers. The company's past history, present health and dynamic condition illustrate that not all family businesses have to forgo their dream: sales have increased every year since 1955, and the company has been in the black since 1950.

The history of J.C. Whitlam Manufacturing began in 1894, when an eighteen-year-old Canadian farm boy, John C. Whitlam II, with only 14¢ in his pocket, came to the United States to seek his fortune. He arrived in Cleveland, Ohio, where he worked for several paint companies over the next six years. While there, he became quite knowledgeable about paints and their formulations. At the time, painters used white or red lead paste as a pigment for their paints. Plumbers and pipe fotters also used lead paste as a thread sealant and lubricant for joining pipes and fittings. This lead mixture was both poisonous and expensive.

Seeing a need for a better way, J.C. Whitlam II developed the first "lead-free" thread sealing compound and called it Tyte-Unyte® (pronounced "tight unite"). The product had three times the bulk value of lead, which made it more efficient and economical. It was also safe for human consumption. (To demonstrate to plumbers and wholesalers that it was not poisonous, he often opened a can of Tyte-Unyte® and ate some of it.)

The company started in Cleveland in 1900, and in 1912, J.C. Whitlam II moved the business to Wadsworth, Ohio, where it is still located today. The company grew steadily, as its single product became the standard for the plumbing industry. In World War I, the armed forces, principally the U.S. Navy, pre-empted virtually the company's entire production. This happened again in World War II, when this modest firm operated under an A-1 priority, right along with the largest defense plants. But that's getting ahead of the story.

the company's fortunes deteriorated. The Great Depression took its toll, and the company fell into dire straits, becoming heavily in debt to the bank. The situation was bad, yet it got worse. J.C. Whitlam II died in 1931, at the absolute bottom of the depression, with nobody to carry on his business except his sixteen-year- old son. J.C. Whitlam III became one of the youngest company presidents anywhere.

"Those were grim times," recalled J.C. "We were down to three employees, including me. No money, no business, no nothing, and worst of all, no control of our destiny." The bank was the administrator of the estate as well as a past-due creditor. And with a sixteen-year-old kid as president, they exercised total and oppressive control. "If we wanted to buy something, we would have to make out the purchase order, take it to the bank, tell them why we needed it and implore their signature," said J.C. "Often we didn't get it, even when the need for the material was desperate. It was the same way with payables. They had to sign all checks."

The bank wanted to liquidate the company and salvage anything they could from the wreck. The young president had many bitter, humiliating battles with them just to keep his father's lifetime of work alive. To force him into agreeing to a liquidation, they kept cutting his salary. Finally, it got down to $10.80 a week, "and this was all — I mean the absolute all — that my mother and I had to live on for two years."

Then, in 1932, the banking moratorium came, and the state banking commission took over the bank, which meant that all purchases, payments and actions now had to be approved by a government bureaucracy. This desperate period was a traumatic experience for the young J.C. It influenced his business philosophy throughout his tenure. "By 1937, we had the bank paid off, and I was my own man at last. I swore that I would never again allow this business to get under the thumb of any outsider, particularly a bank."

"Independent" was a fervent word to J.C., because it was the very basis of his character and values. One has the feeling he would sooner starve as an independent than earn a million dollars a year as any man's subordinate. Since the passing of J.C. in 1993, J.C. Whitlam Manufacturing continues as a family business through the leadership of J.C.'s two sons and two grandsons.

Jack C. Whitlam IV has been with the company since 1961. He attended Miami University and the University of Akron before coming into the business and is now President. He spends about one-third of his time on the road, primarily working with manufacturers' representatives, making joint calls on wholesalers.

Mark A. Whitlam, the fourth generation of the business, has been with the company since 1988. He graduated from the University of Akron with a business degree in marketing. He is following in his father's footsteps as Vice President of Sales.

Douglas A. Whitlam is a graduate of Ohio University and holds a master's degree in business administration from the University of Akron. He has been with the company since 1967 and is now Senior Vice President and Chief Executive Officer. His principal responsibilities are in administration and finance.

Stephen G. Carey, who is part of the operating management team, is a graduate of the University of Akron with a degree in industrial marketing. He has been with the company since 1989 and became Vice President of Operations in 1995.

Sean M. Whitlam, also a fourth-generation member of the business, joined the company in 2001 with a bachelor's degree in business administration from Ohio University. He is the Operations Manager.

At the end of World War II, the Whitlam line consisted of only 3 products, including Tyte-Unyte® Pipe Joint Compound which still accounted for 90-95% of sales. Tyte-Unyte® continues to be a signifficant product today. There have probably been more units of this product sold than of any other chemical specialty product.

By 1975, there were 35 products, and by 1980, there were 50. The biggest growth area, both in items and sales, has been plastic pipe cements. In 1980, Whitlam also added a complete line of specialties for joining copper pipe and tubing. Pipe joining remains J.C. Whitlam Manufacturing's number one product area, as it has been for over 100 years.

Whitlam products are marketed exclusively through wholesalers — over 6,000 of them throughout North America. The company has a sizable export business with sales in Latin America, Europe and the Middle East. J.C. Whitlam Manufacturing is represented by more than 80 organizations around the world.

Over the years, the company has brought progressive changes in both sales and management. In 1981, J.C. Whitlam III, who had long been the driving force of the company, retired from the post of president. The office remained vacant until 1987 when Jack C. Whitlam IV was appointed as president. J.C. Whitlam III remained very active in company affairs, serving as Chairman of the Board, until his passing in 1993.

Sales for J.C. Whitlam Manufacturing have increased rapidly over the last ten record-setting years, placing the company at the forefront of the plumbing, heating and refrigeration industry. It continues to be recognized as one of the leaders in the industry.

Building expansion began in 1987 with the addition of a new shipping and warehousing facility. Additional laboratory and office facilities were completed in 1988. The company's facility expansion continued into 1995 with a 12,000-square-foot addition, which doubled the size of the shipping and receiving department.

was purchased in 1995 and its production equipment and inventory were relocated to the parent firm's location in Wadsworth. Plumb-Pro has over 160 premium quality tools, including shovels, meter keys, pipe cutters, saws, soil probes and gloves. The company expects continued growth with the addition of the Plumb-Pro line of tools and additional plumbing chemical products.

J.C. Whitlam Manufacturing Company is excited about moving forward in developing other innovative products like Blue-Lube™, the industry's first clean, odorless and non-toxic pipe gasket lubricant, and in expanding the company through acquisitions.